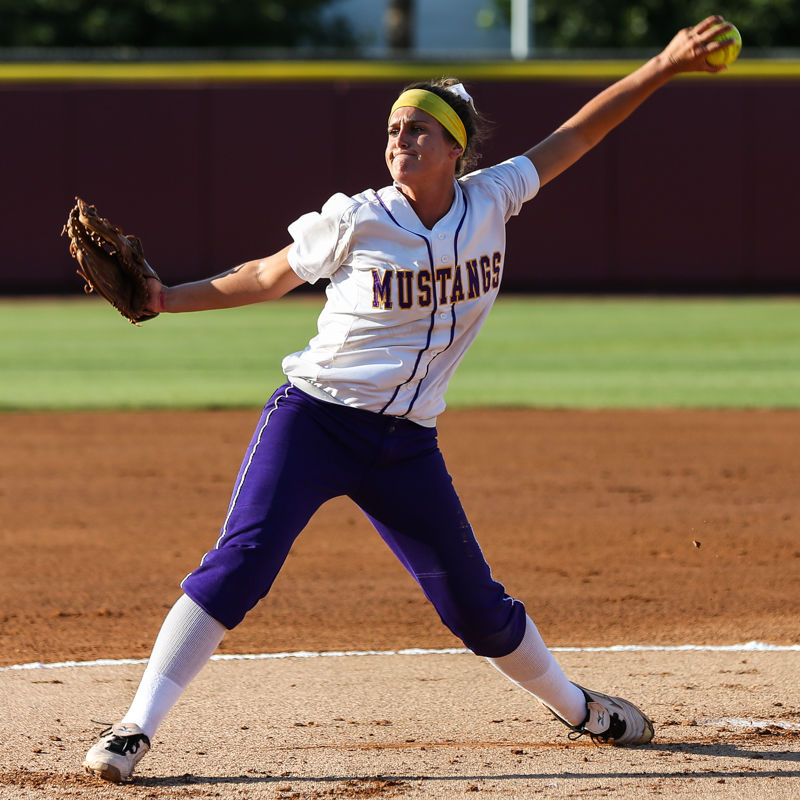 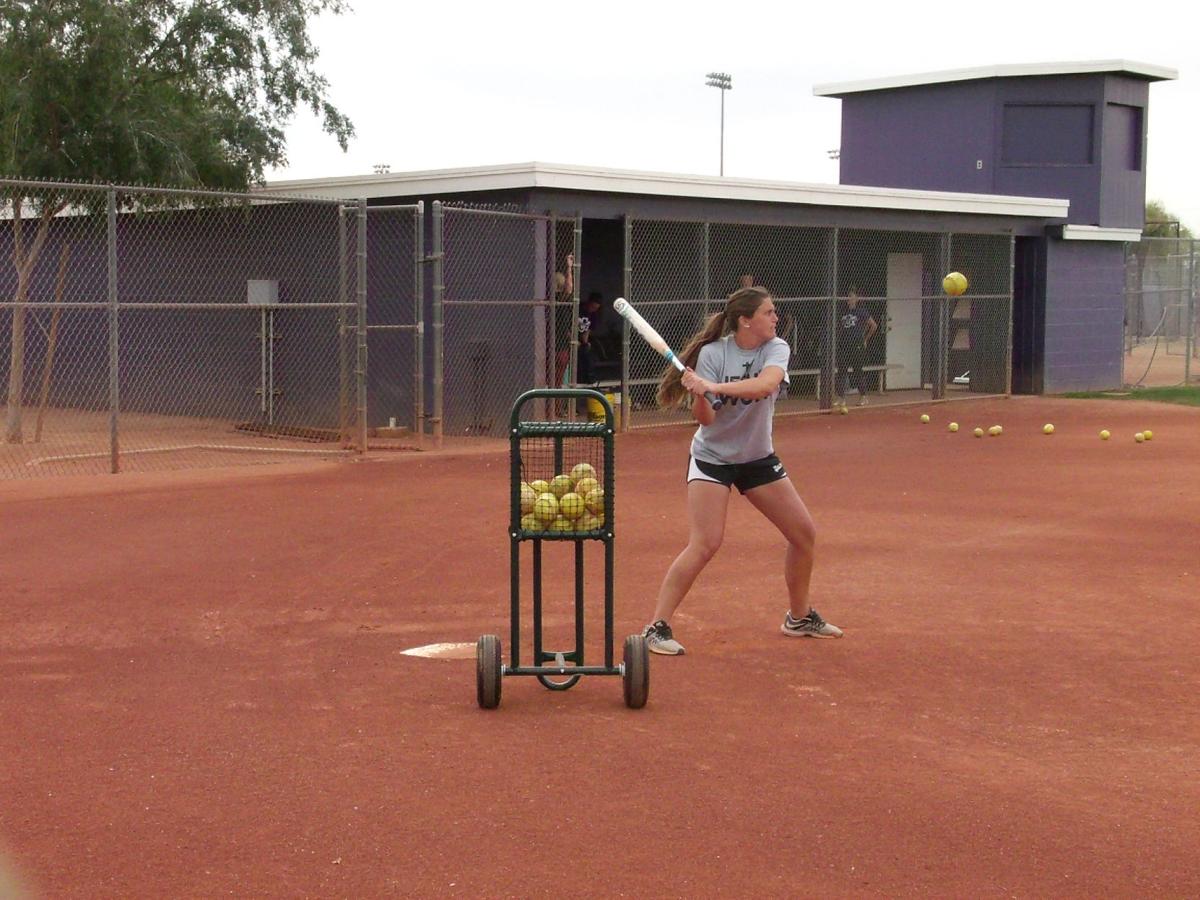 Former Sunrise Mountain pitcher Taylor Nowlin, seen here during batting practice, has returned as a student teacher and is an assistant coach on the varsity softball team.

Former Sunrise Mountain pitcher Taylor Nowlin, seen here during batting practice, has returned as a student teacher and is an assistant coach on the varsity softball team.

Five years ago, Taylor Nowlin was leading the Sunrise Mountain softball team to its last state championship. Now, the prodigal daughter has returned to the other side of the bench, joining head coach Jody Pruitt’s staff as an assistant coach.

“She is one of the top former players we have had here and I am lucky to have her as part of my staff,” Pruitt said. “Her sister (Tori Nowlin) graduated last year and (Taylor) has always been supportive of her sister and our program. So, when I found out she wanted to be a physical education teacher, I told her she needed to be here and around our kids coaching because she is such an amazing person.”

After helping rebuild the Sunrise Mountain softball program on the field, Nowlin moved on to Grand Canyon University where she helped the program transition to Division I status before ending her playing career in 2017.

“I am happy with everything that has fallen into place in my life and I wouldn’t change anything that has happened,” Nowlin said before a recent Mustangs practice. “To me, everything worked out perfect and I am excited about the future.”

Nowlin began playing softball at age 4, playing tee ball before moving up to softball after a couple of months and playing club ball before getting to high school.

“I just loved playing and would play anytime I could,” Nowlin said. “I always wanted to have fun and never took it too serious, but I also knew it could lead to college, which is what I wanted.”

When she got to SMHS under then coach Nick Riser, she was told that if she were on any other team, she would have made varsity as a freshman, but she was happy to be part of the junior varsity team in her first year and a half, she said.

“I came in as a freshman, SMHS had a lot of talent and I was happy to be on the JV team because I could play regularly,” Nowlin said. “I was pulled up for some tournaments, and I learned a lot from those girls, but I didn’t want to sit on the bench, I wanted to play.”

She said watching the varsity games as a freshman helped her grow as a player and she was glad to have two years to learn from some great athletes.

“I got to watch former players (Dani Bonnet, Karissa Haleman and Michayla Heller) and that helped me learn not only how to love the game more, but how to act both on and off the field,” Nowlin said. “It was just the perfect storm for me and I wouldn’t change a thing.”

When her junior year arrived, Nowlin was the key pitcher for the Mustangs and led the team to a 33-2 record, finishing with a 21-0 record and striking out 165 in 138 innings with an earned run average (ERA) of 0.60, but lost the title to Tucson Canyon del Oro 11-9.

“Actually, losing my junior year, to be playing on a college field with all the craziness, it was an amazing feeling,” Nowlin said. “I would love to go back and do it again if I could.”

During her senior year, she was one of the most dominant pitchers in Arizona, finishing 20-1 and striking out 204 batters in 126 innings and finishing with a 0.77 ERA in leading the Mustangs to the 2013 Division II state title.

She committed to GCU during the end of her junior year and started in the fall 2013, when the Antelopes were a Division II team. The Antelopes announced they would move to Division I soon after Nowlin arrived, but the team would not be eligible for postseason play until 2018, after Nowlin’s playing career would be over.

During the recruitment process, Nowlin did not receive many offers, but GCU was the first to recruit her and she said it made her feel wanted.

“(GCU) was one of the first schools to talk to me, and a lot of my teammates had committed during their freshman and sophomore years, so I was kind of late in getting (recruited),” Nowlin said. “I loved the coaches and girls and I got to stay close to home, so it actually was a pretty easy decision.”

She continued to pitch well for the Antelopes and was named the Western Athletic Conference Pitcher of the Year as well as being selected to the National Fastpitch Coaches Association Division I All-Region team in 2016 and 2017.

“Even though all four years at GCU, we were on probation, it was an amazing time and it showed that all the hard work I put into softball paid off,” Nowlin said. “To say I helped build the GCU program, and be the career leader in strikeouts — even for a short time — it is exciting, but I will also be excited when someone breaks that record.”

She said she does not regret her time there, but she does have one thing she wishes she could change.

“The only thing I missed during my career at GCU was the chance to pitch in the tournament,” Nowlin said. “When they were recruiting me, they were Division II, and never said they were moving to Division I, but I have no regrets. I would have loved to play in the post season, but it was still an amazing experience.”

When she decided to become a PE teacher, Pruitt was quick to tell her she could join her staff and do her student teaching at her alma mater.

“I told her, when she is ready, she has a place on my staff,” Pruitt said. “I told her she needed to be around kids coaching and she is such an amazing person, I am honored to have her on my staff.”

Although she started college wanting to be a kindergarten teacher, she made the change quickly after working with young children at a summer camp.

“I started college and they said I had to choose a major, but I was 18 and working with kids at camp, so I wanted to be a kindergarten teacher,” Nowlin said. “But I just couldn’t do boogers, and I love kids, they are so funny. Then I remembered my time with (Pruitt) in her classes, so I decided to be a PE teacher.

“Plus, I get to wear (shorts and a T-shirt) to work every day; what else could you ask for? Besides, I am not sure I could sit at a desk all day, I just wanted to do something I love, and I love being back at Sunrise.”

When she joined the SMHS coaching staff, Nowlin was nervous but ready to teach the girls what she knew, she said.

“When I came in, I was worried the girls would either take advantage of me or not listen to what I tell them, but it has been the absolute opposite,” Nowlin said. “I bring positivity and energy. Look, I am always happy and I don’t like when people are so serious. Softball should be fun all the time. You can be serious, but just don’t take it too serious, that is what I try and tell them.”

Pruitt said she gave Nowlin full rein to the pitching staff and she has taken the reins and run with them.

“She is totally in control of our pitching staff and, since her coaching is coming from a college pitcher that the girls have seen, they take everything she says to heart,” Pruitt said. “Coach (Kirsten) Monk and I are just two old farts who played, but they can’t find information about us, and they have seen (Nowlin) and they really are listening to her.”

She will graduate in December with a bachelor’s degree in physical education and hopes to remain at Sunrise Mountain.

“I hope to stay here, but I just want to be a PE teacher and am excited for the future,” Nowlin said. “To be here and to help lead the Mustangs back to a title as an assistant coach — that would be the ultimate.”

Pruitt said Nowlin has already been a major asset and knows she can do anything she puts her mind to.

“Nothing about (Nowlin) surprises me because she is almost perfect in my eyes,” Pruitt said.