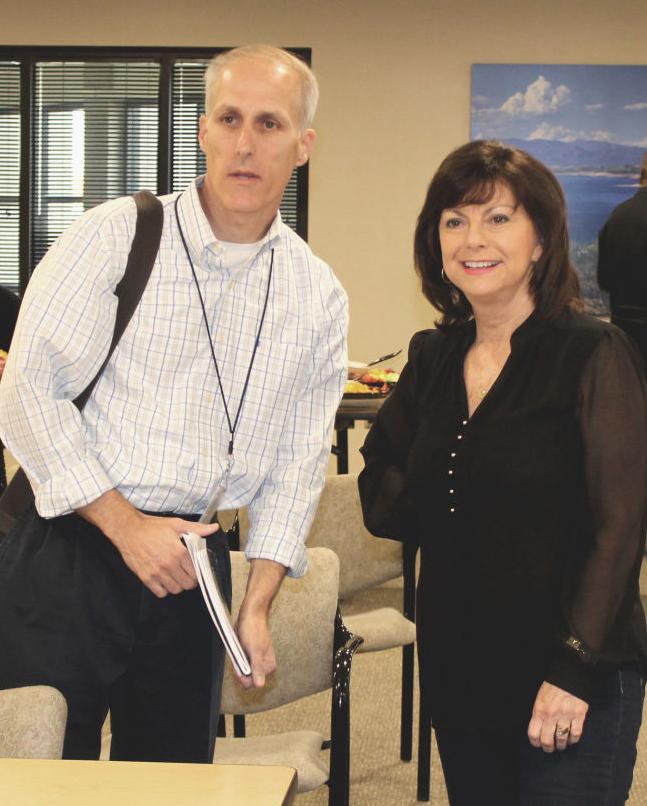 City Manager Jeff Tyne and Mayor Cathy Carlat discuss the topics for the day before the start of the workshop. 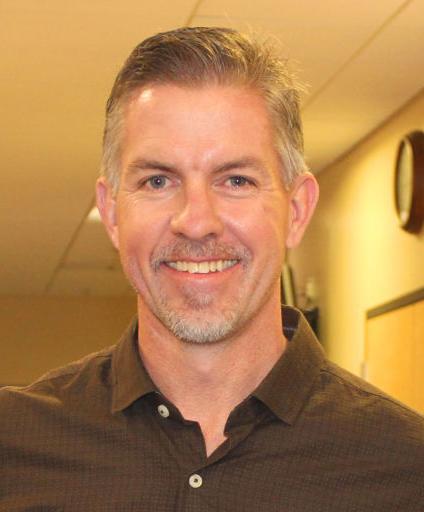 In all of the presentations, shade was mentioned, and Mayor Cathy Carlat suggested it might be time to consider a Shade Master Plan. Above is a collection of sites in P83 Entertainment District.

City officials held a workshop March 16 that packed into its discussion four themes addressing placemaking; special events; arts and culture; and public/private appearance. Within those themes were sub-elements. This week, we will be looking at the placemaking theme.

Mayor Cathy Carlat opened the workshop with remarks about the importance of the topics for discussion.

“This is a really important day” she said. “Today, we’re painting the picture of the personality of our city, its unique character. We’re going to talk about putting those things into action today.”

She said Peoria wants to be a place where people want to live and work. “We have to deliver it now,” Carlat said. “Find ways we can begin to accomplish that. There’s a lot at stake here – property values, economic development, prosperity. It’s time to accelerate our vision and turn it into a plan.”

Funding ($500,000 each) has already been allocated in the fiscal year 2018-19 budget for steps to take in Old Town, the P83 area and Happy Valley Corridor. First, the city had a lesson in what placemaking means.

Trevor Freeman with the city’s office of communication gave a definition of placemaking, calling it “the art of creating public places of the soul that uplift and help us connect to each other, a process and a philosophy.”

Freeman said the four key attributes to placemaking are:

• They are accessible and well connected to other important places in the area.

• They are comfortable and project a good image.

• They attract people to participate in activities there.

• They are sociable environments in which people want to visit again and again.

Deputy City Attorney Andy Granger pointed to placemaking elements throughout the city either in place or suggested for the future such as:

• Entry monuments, which the city continues to build with lighting and architecture. He said a lot of them have raised landscaping, which creates a green effect, a park-like effect.

• Bridge aesthetics. They should have some kind of artistic feature, Granger said. He showed council an artist rendering of the proposed Happy Valley Parkway Bridge that has a 12-foot bike pathway on each side, and on each pilaster is a light pole with a knockout space for a mosaic art piece.

Granger said a quick and reasonable placemaking opportunity exists in Old Town in the park-and-ride across the street from Peoria Community Center. With the city’s plan to move the park-and-ride to the north side of the railroad tracks alongside Grand Avenue, the present park-and-ride could easily be converted to a pop-up park and play. Although that project is still a couple years away, Granger said it could be “somewhat a pilot program.”

Also to be considered for Old Town is expansion of the planter program, including the area size as well as the planter sizes.

“We could do this wherever we feel is appropriate,” Granger said, adding the public would be involved in the process.

When Councilmember Jon Edwards was at the National League of Cities and Towns convention, he learned Minneapolis did the intersection painting “and it was highly successful,” he said.

The city is considering providing outdoor seating space next to Driftwood Coffee Co., the newest coffee shop in Old Town at 83rd Avenue and Jefferson Street. A ramp would be placed along 83rd, and a plaza would be created to take out two parking spots. Brick pavers, planters and a ramada structure could be installed, along with the addition of street furniture. Granger said the city could work with Driftwood to place speakers outside the coffee shop.

When Councilmember Bill Patena was at an HOA meeting, he was asked what the city was doing in Old Town to bring people from North Peoria to the area, he said.

“Part of it is a sense of would you meet your friends there, or bring family there?” Freeman said.

Granger said this was just one step in the process.

“I see this as an example of the city relating to success of new business coming in,” Councilmember Bridget Binsbacher said.

Vice Mayor and Councilmember Michael Finn was also positive in his comments, saying, “I like this. I really like the thought process of repeating foot traffic, use more of our space.”

Councilmember Vicki Hunt said, “Now we have complete engagement. Theater Works is a gem in Old Town. Theater Works has the opportunity and obligation to start marketing to the Vistancia area.”

First on the discussion of the P83 district was the vacant Salty Senorita property on Paradise Lane. It lies west of the It’s All in the Game, north of the San Diego Padres practice fields at Peoria Sports Complex.

Opportunities in that area include green space, shade, seating, a water feature, live entertainment and food trucks next to events at the sports complex.

One other P83 suggestion would be installation of furniture at a plaza across from Harkins Theatres.

Blooming Spire, a public art piece at the northeast corner of Happy Valley and Lake Pleasant parkways, will be complete by the fall. It has the potential for seating and shade, Granger said.

Happy Valley and 83rd are a challenge because of limited city-owned land. However, Granger said, the opportunity exists for public/private partnerships, whereby the city could help enhance and create whatever developments occur.

Binsbacher asked, “What takes you back to these places? Something unique to an area. But come up with specific components before they (businesses) can participate in this partnership.”

Before presenting a program sequence and strategy for Old Town, Economic Development Director Scott Whyte said Peoria Place, where Maricopa Integrated Health Systems is building a $70 million facility at Cotton Crossing and Grand Avenue, was important over time to how bodies are added to Old Town.

In his PowerPoint graphic, Whyte pointed to all of the elements of the major block between Washington and Jefferson streets and 83rd to 84th avenues.

In his analysis, Whyte wrote, “The Block within Old Town aspires to be an interactive, flexible development that is inspired by art and events and is inclusive of residents, workers and visitors.”

The PowerPoint narrative for the Old Town Block features one block as Artisan Row, another as The Eatery, then Old Town Green in the center of the Jefferson Street block. One part of the Washington Street block is named the Event Center/Outdoor Space, while 84th Drive between Washington and Jefferson is called Activity Promenade, which would eventually be turned into a pedestrian walkway. The park and ride is pictured as Activity Space, while the block between 84th Drive and 84th Avenue is designated as Future Phase.

Tyne said the plan would require private investment, “but only occur if we see energy in it.” Nothing is programmed at the present time.

Overall, Finn and Binsbacher agreed the city needs to have a structured plan.

Of note: Carlat asked about the importance of shade to the city’s plans for all of the placemaking elements. Freeman answered, “Very important.”

At that remark, Carlat said it might be time to come up with a Shade Master Plan.

Next week: Special events; arts and culture; and public/private appearance.